It started with the smell of roast pig.

As we walked down the meandering pathway from our pension to the old town, I stopped in my tracks. The sweet smell of garlic, herbs, and smoke wafted from a window, bringing with it the memories of fiestas, weddings, and summers spent with cousins and grandparents in the countryside. Roast pig had always been the star of every happy occasion, and now it heralded another one. Giddy with excitement, I declared to my boyfriend even before I set foot into the old town: “I love Cesky Krumlov!”

We entered from the south, a leisurely 10-minute walk from our pension where we checked in late the previous night. We were greeted by a viewpoint of the town, where already, several tourists were stationed and taking pictures. We made a beeline to the tourist information office in the town square, yet, even the shortest distance had us turning into alleys and getting glimpses of multiple angles of the town. There were no main roads or shortcuts in Cesky Krumlov – only twisted streets and scenic routes that opened into breathtaking vistas.

After claiming our Cesky Krumlov cards, we made our way to the castle grounds. It was a slow trek, partly due to the slight ascent through cobblestone streets, but mainly thanks to the sights that demanded attention and a hundred clicks of my camera.

The town’s streets were narrow and winding and the buildings were tall and imposing – you couldn’t see far beyond, making each turn a surprise.

I could only take a few steps at a time before finding something to marvel at. Sometimes these were “ordinary” Czech things that my Czech boyfriend took for granted – a whiff of cinnamon from a trdelnik store, an old lamp post, a glass display of Bohemian garnets and moldavites, a row of Gothic houses with colored façades.

But sometimes, even he had to stop and look up and around – like when the narrow street of Radniční suddenly opened to the Lazebnický most, the bridge crossing Vltava on the way to the castle. It was a 360-degree wonder: reconstructed medieval buildings standing strong along the banks of the river whose waters sparkled under the morning sun, the towering state castle preserved from the 14th century, religious monuments along the bridge, street musicians elevating the ambiance and giving life to a place seemingly frozen in time – all set and thriving on the Vltava, the river that has remained central to the history and development of the town through the centuries.

As we turned left from Latrán to Zámek, a pub distracts my boyfriend. He had always been quick to invite me for a beer or a glass of wine (he is Czech, and a Moravian at that), but this time he was offering something different: “Would you like to try the mead?”

We shared a glass of mead and went on our way, more intoxicated with the experience shared by various civilizations since ancient times than with the alcohol.

By the time we reached the castle grounds, I was already so in love with the town that I didn’t think it was possible to be even more so. But I was wrong.

A quick walk through a passageway led us to the most amazing view of the town. I watched the town going about its day. I imagined the Rosenbergs and the Schwarzenbergs – some of the notable royal families who lived in the castle and the adjoining estates in the 1200s – going about their day. I’m convinced that whenever they passed by this spot, no matter the political or economic climate of the time, they took a moment to enjoy the grand view.

We then made our way to the sprawling castle grounds, walked around the maze, the tree-lined alleys, and around the pond. Everywhere we looked, people were in pairs – holding hands, walking their dogs, sitting on benches. Love was certainly everywhere. 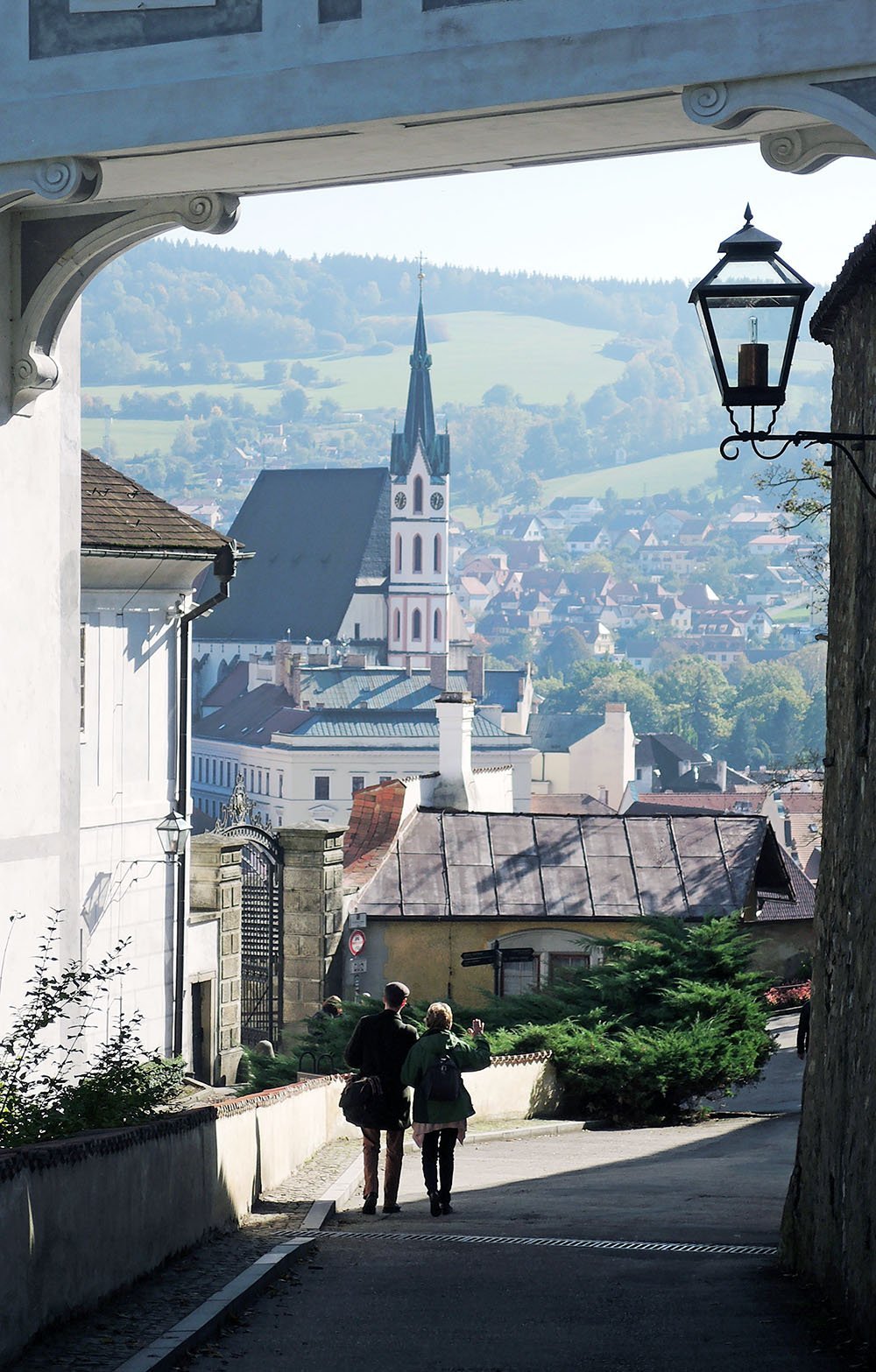 Icons in Cesky Krumlov – the saint and the bad boy

From the castle grounds we retraced our steps back to Latrán and made our way to the Monastery.

The Minorite Monastery in Cesky Krumlov was first established in 1350 by the Rosenbergs, with the main aim of weakening the Walden movement, a Christian movement gaining popularity in Europe at the time. The Waldensians promoted apostolic poverty, which didn’t fly with the Rosenbergs. The royal family loved their indulgences, including religious ones. The monastery was then used by the royal family to accumulate relics and eventually they started to compete with Prague in terms of festivals and religious relics.

The monastery grounds were designed for reflection. Shaded benches and grassy lawns in a peaceful courtyard invited guests to take a moment and slow down.

We went into the exhibits for a glimpse of how the Minorite monks have been conducting their duties and their lives throughout the centuries. At the far end was an entire room dedicated to the life of St. Francis of Assisi, with illustrations depicting his life and his journey to sainthood.

From the monastery, our next stop was the Egon Schiele Art Centrum – a tribute to Cesky Krumlov’s resident bad boy.

Egon was definitely “edgy” before it was cool. One look at Schiele’s bold strokes and erotically-charged motifs and you could tell this guy was bad news, in a dangerously intoxicating way. Think: leather jackets, motorcycles, the guy your mother warned you about. He’s even got the brooding pout down pat.

He died at 28 of Spanish flu, one of the 20,000,000 lives claimed by the pandemic throughout Europe, but not before significantly influencing the art climate with his audacious style that challenged all the norms of his time.

You can read more about Egon Schiele’s life and art here:

A personal touch to tie it all up

Back in Latrán, the bright bohemian storefront of Cesky Pernik called to us. Inside were shelves of mead in every imaginable flavor, gingerbreads with icing art, and other regional specialties.

The Czech Republic takes great pride in its regional products. There are the Czech beers that you will hear every Czech rave about; the Moravian wines that every Moravian could discuss for hours; and in Cesky Krumlov, they have gingerbreads that come with centuries’ worth of artisanal history. As I watched one of the shopkeepers decorate the freshly baked breads with icing, my boyfriend asked her if I could take a photo. The shopkeeper gave me a better offer: would I like to try drawing on the breads?

So I went behind her table and joined the ranks of historical gingerbread-makers in Cesky Krumlov. Even though I was just writing my and my boyfriend’s names – the sort grade school girls all around the world are doodling on their notebooks – I still earned the two shopkeepers’ doting attention.

I thought the gingerbread incident would be the last bit of icing on top of my fairytale town cupcake, but Cesky Krumlov wasn’t done with me. Like an ardent suitor, it had more tricks up its sleeve.

On the way back to our pension, I spotted a rainbow while crossing the bridge. And while chilling in our room, gushing about the day, we heard the unmistakable sound of fireworks.

As we looked out our window at the old town of Cesky Krumlov, the castle shining brighter than the fireworks punctuating the clear evening sky, my boyfriend asked me the question I’d been waiting for: “Should we stay another day?”

If you love fairytale towns with heaps of history, culture, and art, a holiday to Cesky Krumlov is perfect for you. Here’s how to start planning your trip:

A visit to Prague and the surrounding countryside is also a must, making a perfect 5-day holiday to the Czech Republic.

This site uses Akismet to reduce spam. Learn how your comment data is processed.